I am running a Jira Cloud instance that is integrated with a Gitlab Cloud (SaaS, no paid subscription) repo using the official tools. I have successfully created several automation rules in Jira, so both apps are well configured and connected, but there is one rule that is not working, it is not being triggered

My desired flow is

This flow is working except for the last step. I have created the Jira rule for it but the rule is not being triggered. Since the rule trigger is cloned from the 1.4 rule, I am assuming that the problem is that the integration is failing, Gitlab is not publishing the event

This is my .gitlab-ci.yml file

That fakecommand is on purpose for forcing the pipeline to fail 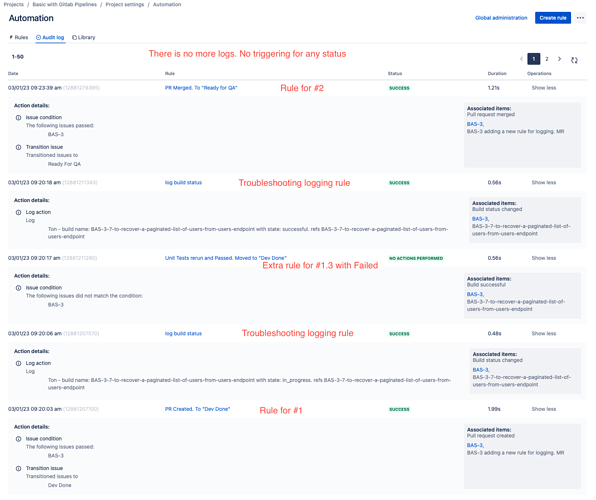 Is it a bug?
Should I modified my pipeline? As you can guess, my goal is to have feedback on the main branch performance after the merge is completed.

I have found that the Merge Request has the pipeline check as passed because it only checks the jobs that are executed at “merge_request” event, but the Merge Request has another pipeline failed, the one that is executed at “push” event. Merge Requests: Merge requests · tongilcoto-xray / dev-fake-project · GitLab , Last MR …BAS-3 adding a new rule for logging. MR (!9) · Merge requests · tongilcoto-xray / dev-fake-project · GitLab 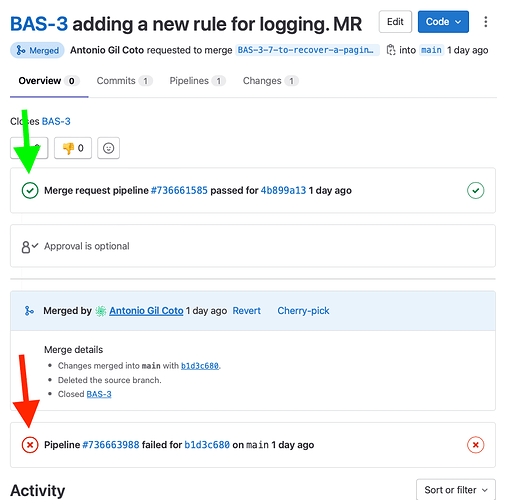 If this behaviour is intended, how can I get the result of the pipeline on “push” in Jira?